For my personal Poem A Day Challenge , today’s PAD prompt is … a full house.

Robert Lee Brewer’s AprPAD challenge prompt is take the phrase “Last (blank),” replace the blank with a word or phrase, make the new phrase the title of your poem, and then, write your poem. .

NaPoWriMo‘s featured participant is Marilyn Rauch Cavicchia, whose georgic poem for Day 22 explains to us how (not) to grow a cabbage! NaPoWriMo’s went old-scahool today for a featured poet: poet T.S. Eliot being interviewed in 1959 by  poet Donald Hall. Not entirely sure who these two are?

I’m going to quote NaPoWriMo verbattten here, they have a great description of elevenies (which I am unfamiliar with):

“Our prompt for Day Twenty-Three comes to us from Gloria Gonsalves, who challenges us to write a double elevenie. What’s that? Well, an elevenie is an eleven-word poem of five lines, with each line performing a specific task in the poem. The first line is one word, a noun. The second line is two words that explain what the noun in the first line does, the third line explains where the noun is in three words, the fourth line provides further explanation in four words, and the fifth line concludes with one word that sums up the feeling or result of the first line’s noun being what it is and where it is. There are some good examples in the link above.

A double elevenie would have two stanzas of five lines each, and twenty-two words in all. It might be fun to try to write your double elevenie based on two nouns that are opposites, like sun and moon, or mountain and sea.”

Poets&Writers’ prompt is take a poem you are revising and map it – then use the map to guide your revision.

The Poetry School’s prompt today is very challenging – compose a poem fully in your head before committing it down on paper. Not sure I can do this one – my current disabilities will allow this one (unless it’s only 10 words long ...)

I’m late in posting this – Yesterday  wore me out. yes – I made the art contacts I needed to. But between that & the wonderful March For Science, I was downtown/Capitla Mall for most of the day.

And then … EArth Day Part Two …I came home and cared for my personal earth. Spent the late afternoon giving my front yard weeding and the personal atention it’s been lacking lately.  (Son has been unable to get to it.)  It is mostly weeded & mown.

AS a result,  I can barely move last night & today. Time for yoga!

Living in the Capital of Oregon, naturally I am politically astute & active; I strongly believe in the effacity of standing up for right and for speaking out on the wrong. So today I want to share some pix of Salem, Oregon’s March For Science. I’m so proud of Salem! I also some familiar faces from the small towns around Salem – like photographer Richard Berry.

I  don’t have them all transferred from my fickle phone yet – I’ll be adding them through the day. There were sooo many creative protest signs! I only got a few that were there.

Panoramic of the Advocasy Groups and podium. 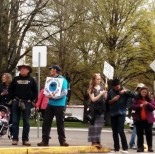 marchers on the Steps of Oregon’s Capital

Standing Up For Science

One of the Scientists speaking 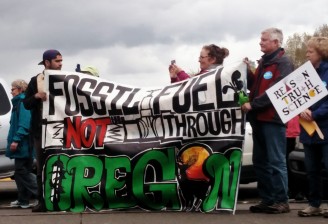 “Fossil Fuel Not Through Oregon”

Me In the crowd.