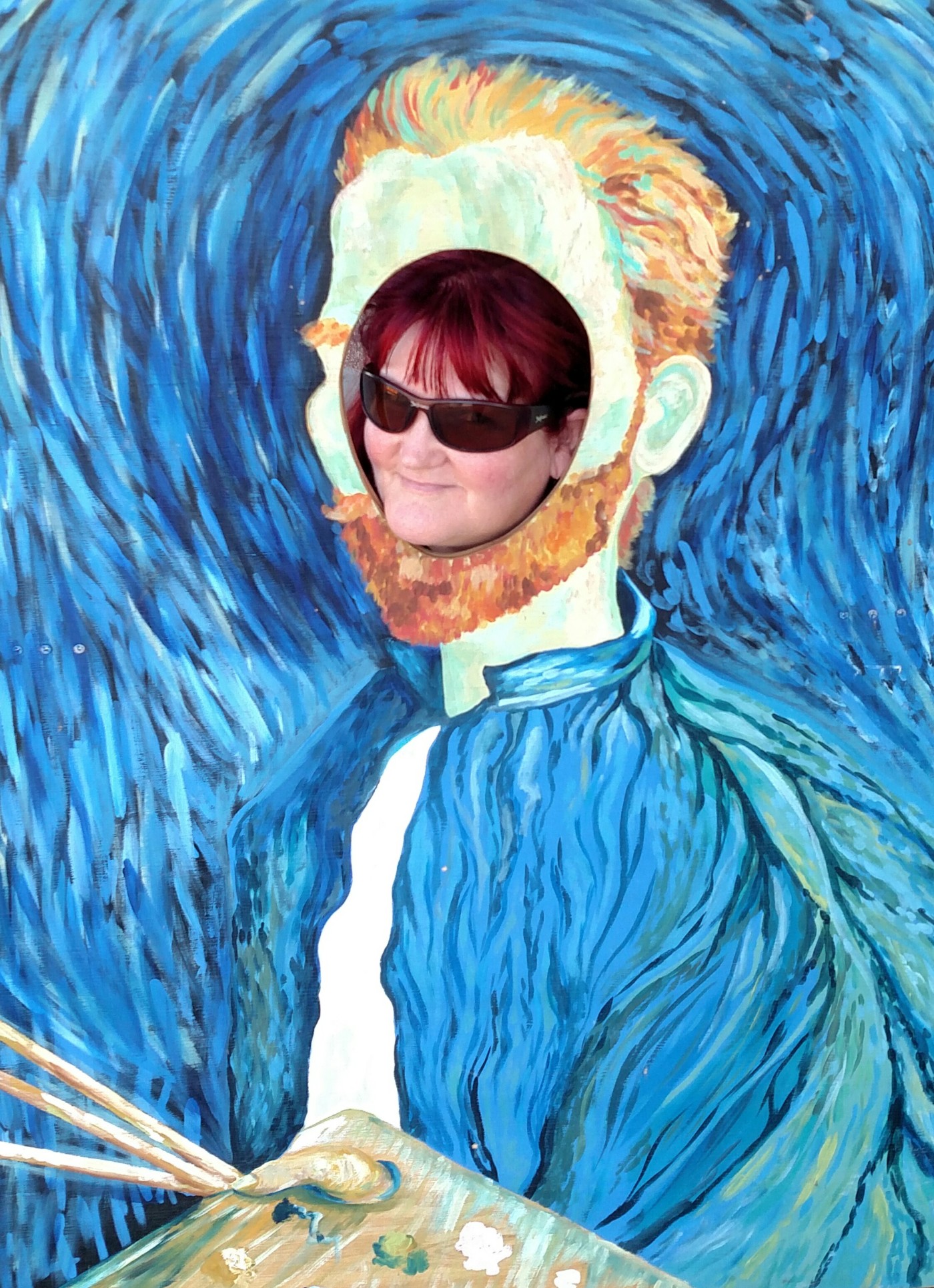 Today I’ve been thinking of one of my favorite artists, Vincent Van Gogh… and, hey, I’ve a pix taken yesterday of him & I together – him the beauty, me the brains.

My favorite portrayal of Vincent was in Dr Who (the episode that centered around the Church of Auvers painting), when Smith’s Doctor & Amy Pond spent time with Vincent. We almost all know that Van Gogh suffered

END_OF_DOCUMENT_TOKEN_TO_BE_REPLACED

I keep falling down those rabbit holes; seriously, I think that March Hare has a thing for me. But there’s only so long I can walk on ceilings before the need becomes driving for solid earth again.

Dec 30 has a mess of differnt historical happenings such as Dec 30, 1936 ;The United Auto Workers union staged its first sitdown strike.

So, as we traditionally look END_OF_DOCUMENT_TOKEN_TO_BE_REPLACED

And  – dang – a soup of that sounds END_OF_DOCUMENT_TOKEN_TO_BE_REPLACED 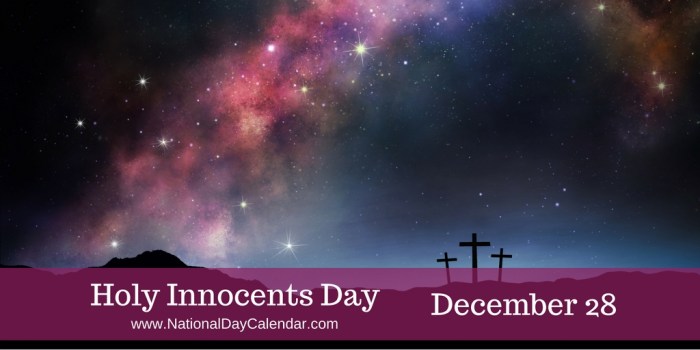 Today – as one of the Twelve Days of Christmas – is Holy Innocents Day. And that is END_OF_DOCUMENT_TOKEN_TO_BE_REPLACED

I do have two paintings on the Something Red Art Walk in Downtown Salem: RedHead @ Elsinore Gallery  & Framing and Tent at World Beat @ CCTV through the end of December  – both available for sale. (Though I heard a rumor that CCTV is closed this week for the holidays.) I will be picking them up when December ends.

END_OF_DOCUMENT_TOKEN_TO_BE_REPLACED 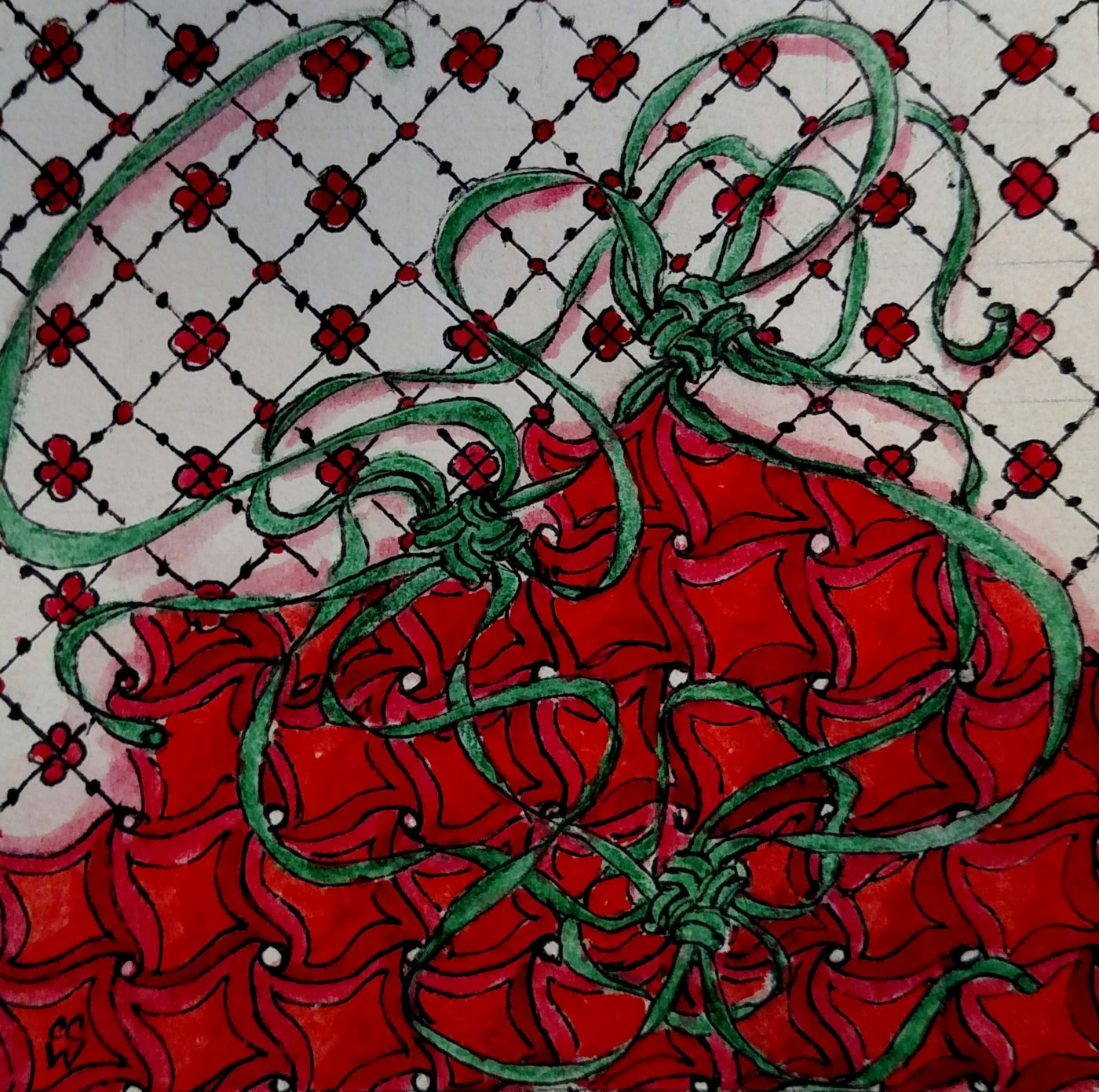 Last day of challenges. I have about 2K words left to write for NaNoWriMo. And 2 poems to go …

I am still pondering posting a prompt a day starting tomorrow if anyone is interested … Let me know. END_OF_DOCUMENT_TOKEN_TO_BE_REPLACED 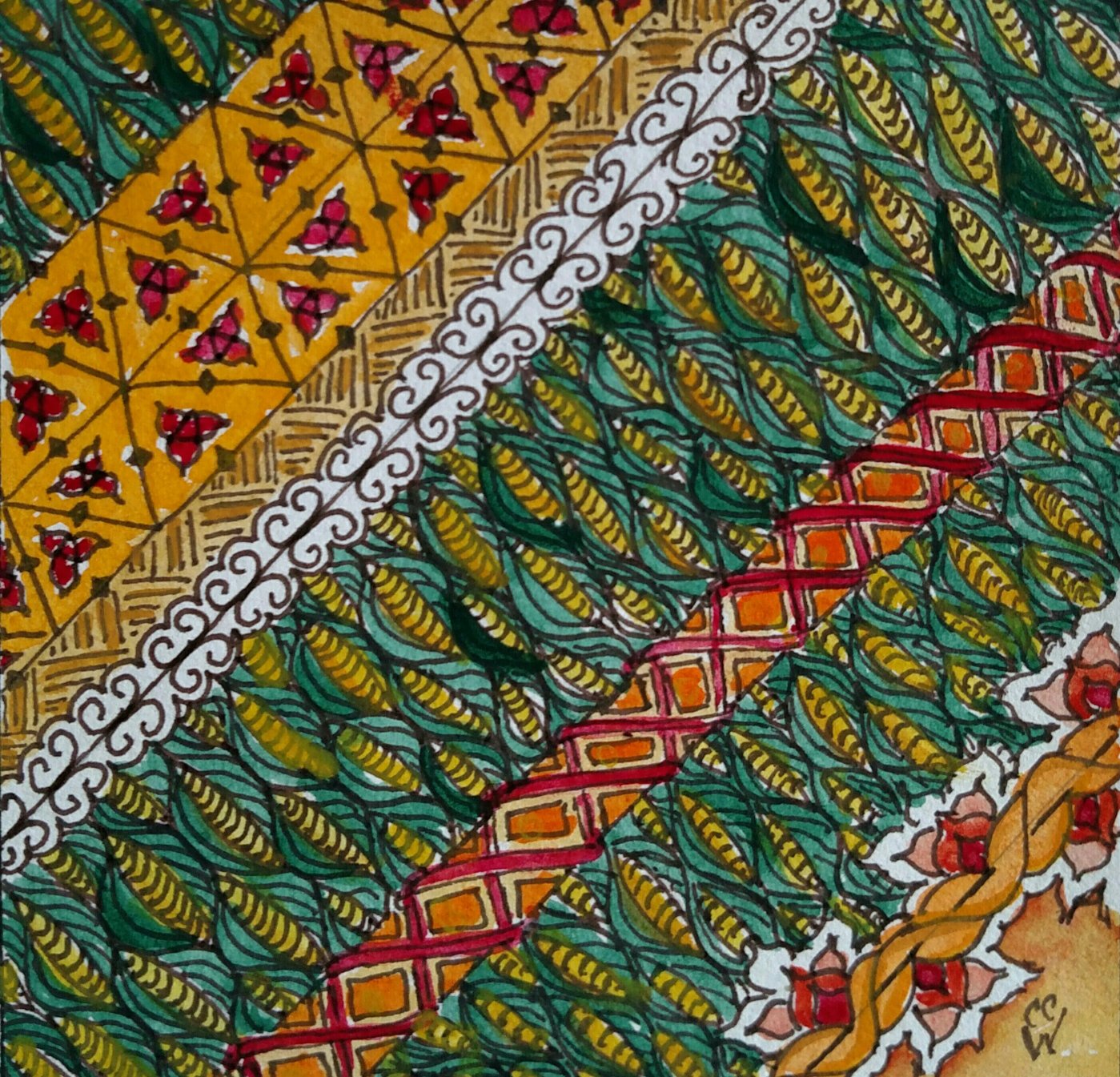 Challegiing day but excited for Thanksgiving! Son has asked to be the Meister Chef tomorrow and looking forward to what deliciousness he whips up.

Hopefully the brownies will take the day off…

RLB today suggest using “(blank) Day” as the title of today’s NovPAD poem. This may end up being an elegy to my Grizzly (T-Day was always his holiday … and now Son takes up the mantle.)

Poetry Potion has a prompt of “Angels & vices” – I first read that as Angels and voices” … Might become my poem.

I’ll have to pick this one up later; don’t have it with me right now …
Zentangle

I did a fun Fall tangle this morning! It features the patterns of Trimind, Bask-It, Swirly, Vega & Flovine against a background of Twenty-One. 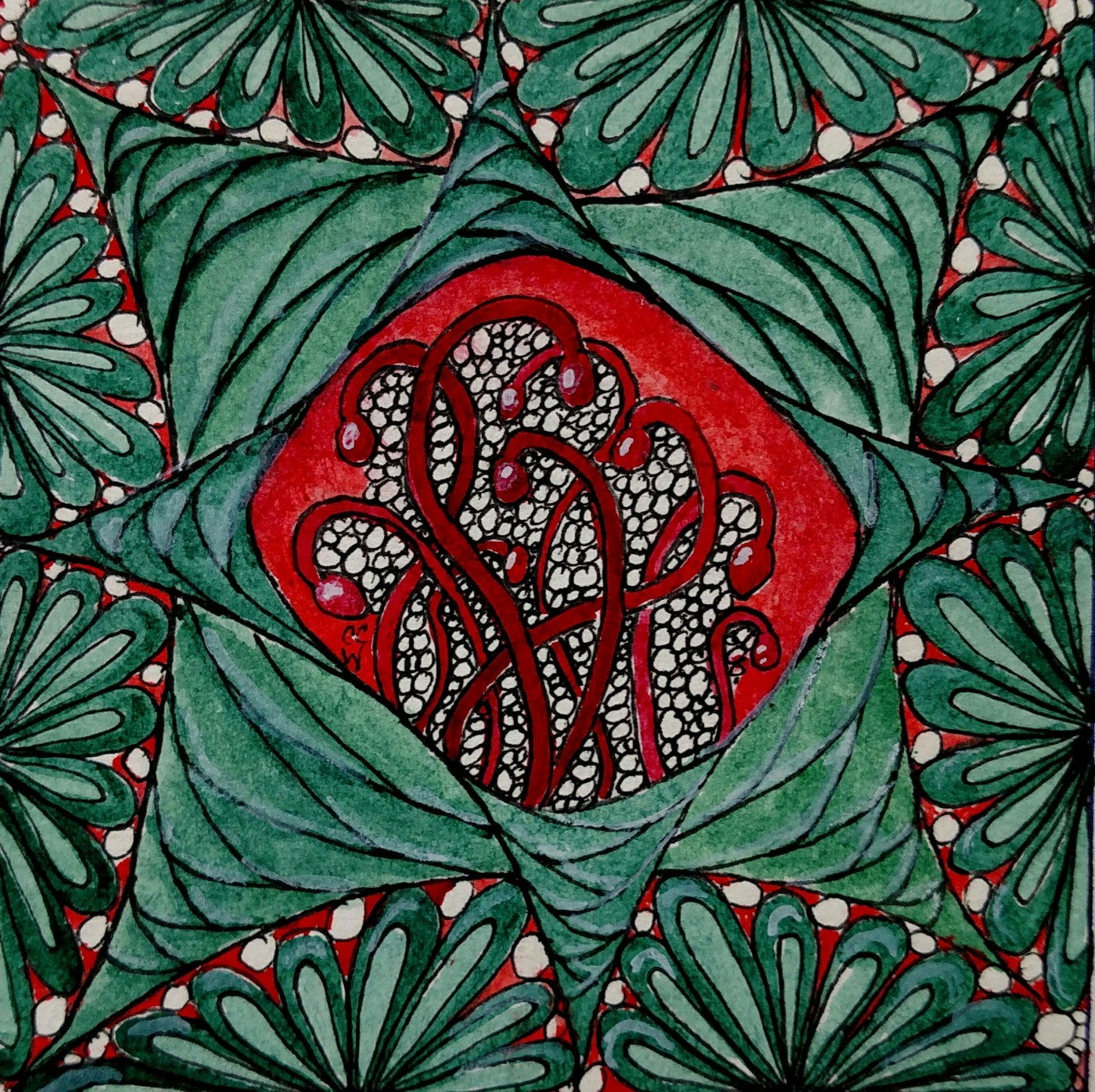 I’m behind the counter today with my red head, assisting in the Artists in Action’ “Something Red” Art Walk intake … Been kept busy as artists throughout the Willamette Valley drop off art for this annual event!  END_OF_DOCUMENT_TOKEN_TO_BE_REPLACED 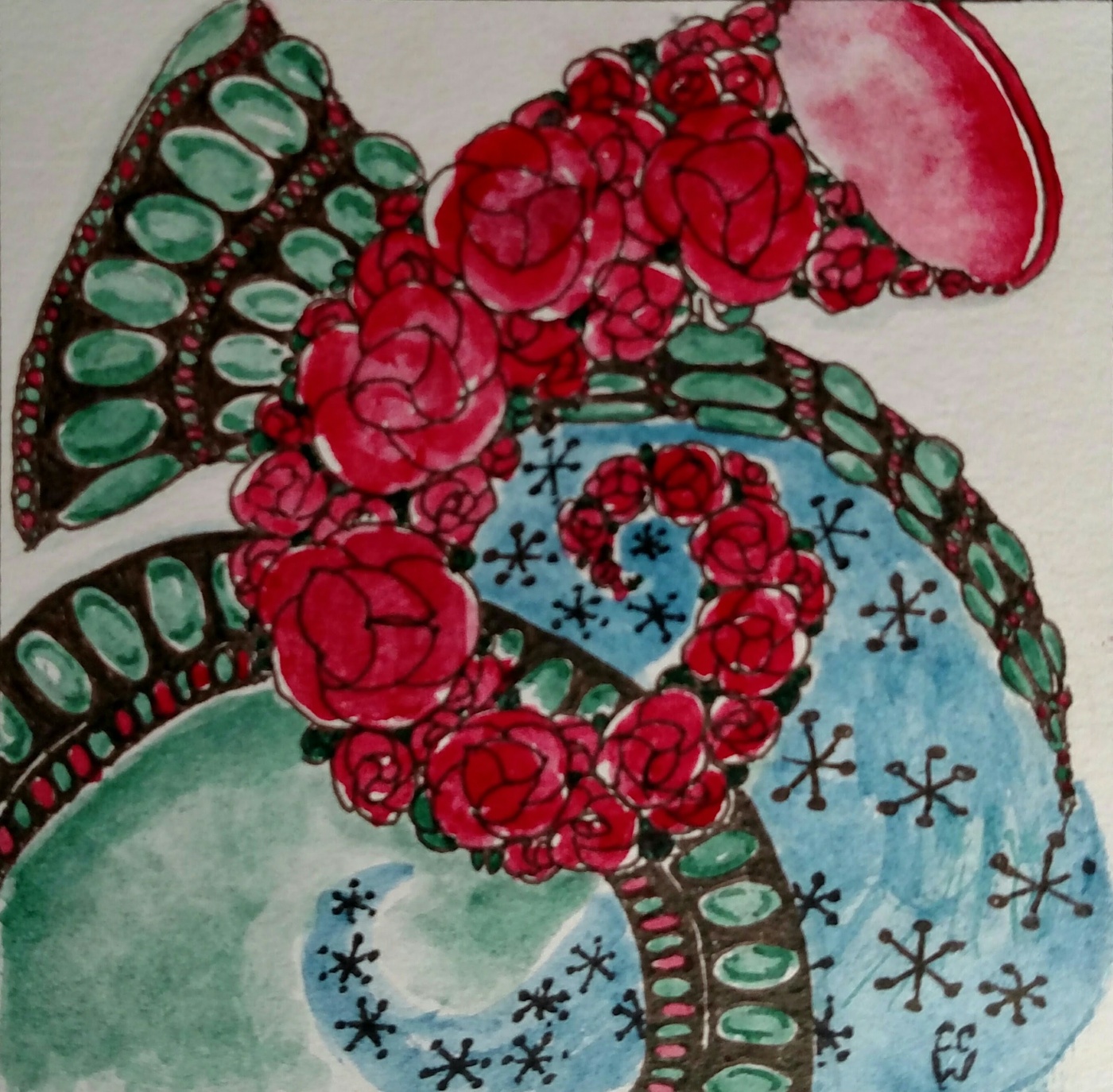 Okay – Now that midnight has past and my fridge is full of tastry turkey (Thanks, Son!), I’ll now concede it’s Christmas in the house! Something about a full meal with the family and then board games around the table definately get me into the mood! As you could probably tell from last night’s tangling … 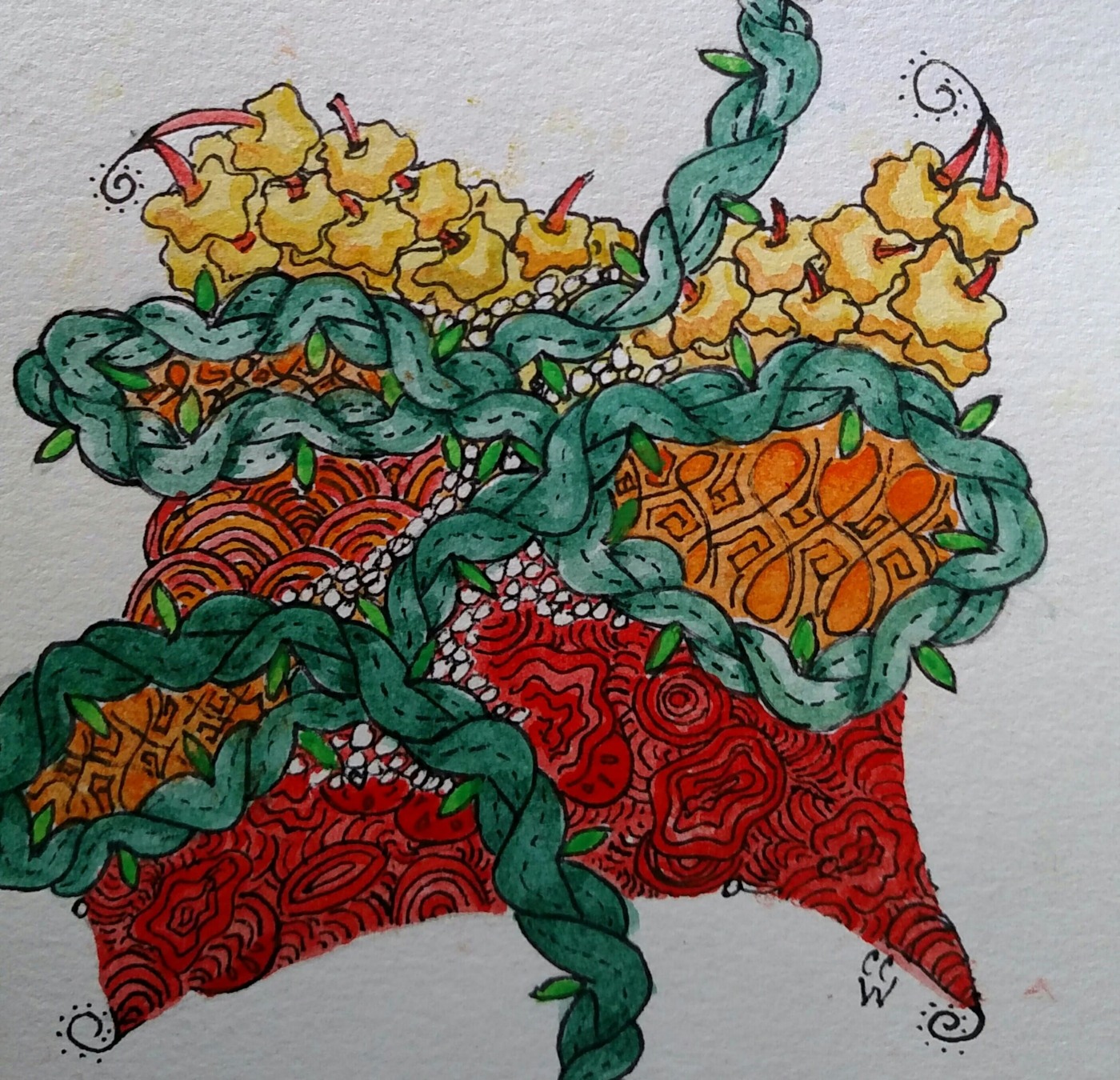 Happy Thanksgiving to those in the United States and Americans abroad! Expecially to our  brave our, defense warriors stationed away from family.

I’m not one these days for expressing my gratitude aloud these days, other than thanking  someone for a favor they have done.  The reason being= it seems a sure-fire way to lose what I appreciate having. END_OF_DOCUMENT_TOKEN_TO_BE_REPLACED

Challegiing day but excited for Thanksgiving! Son has asked to be the Meister Chef tomorrow and looking forward to what deliciousness he whips up.

Hopefully the brownies will take the day off…

RLB today suggest using “(blank) Day” as the title of today’s NovPAD poem. This may end up being an elegy to my Grizzly (T-Day was always his holiday … and now Son takes up the mantle.)

Poetry Potion has a prompt of “Angels & vices” – I first read that as Angels and voices” … Might become my poem.

I’ll have to pick this one up later; don’t have it with me right now …
Zentangle

I did a fun Fall tangle this morning! It features the patterns of Trimind, Bask-It, Swirly, Vega & Flovine against a background of Twenty-One. 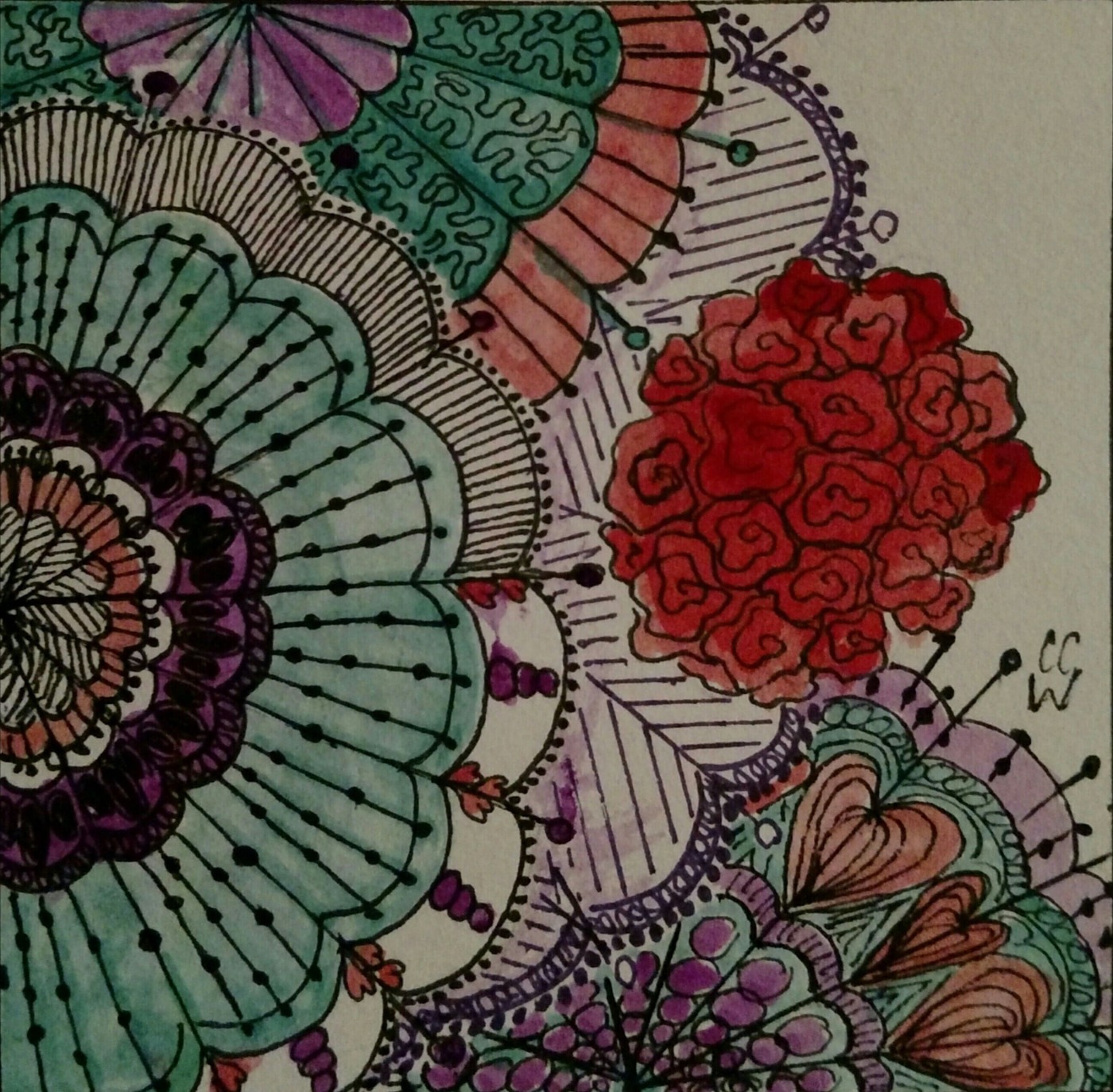 Spent this morning looking for my glasses; never did find them. I suspect the brownies took them & hid them. Today is also a day when physical law refuse to work for me. Those two challenges leave today being a “catch me if you can” day.

I need to spend today in my role as CC Willow, working on my online art offerings & setting up a holiday sale. So, on for today …

END_OF_DOCUMENT_TOKEN_TO_BE_REPLACED 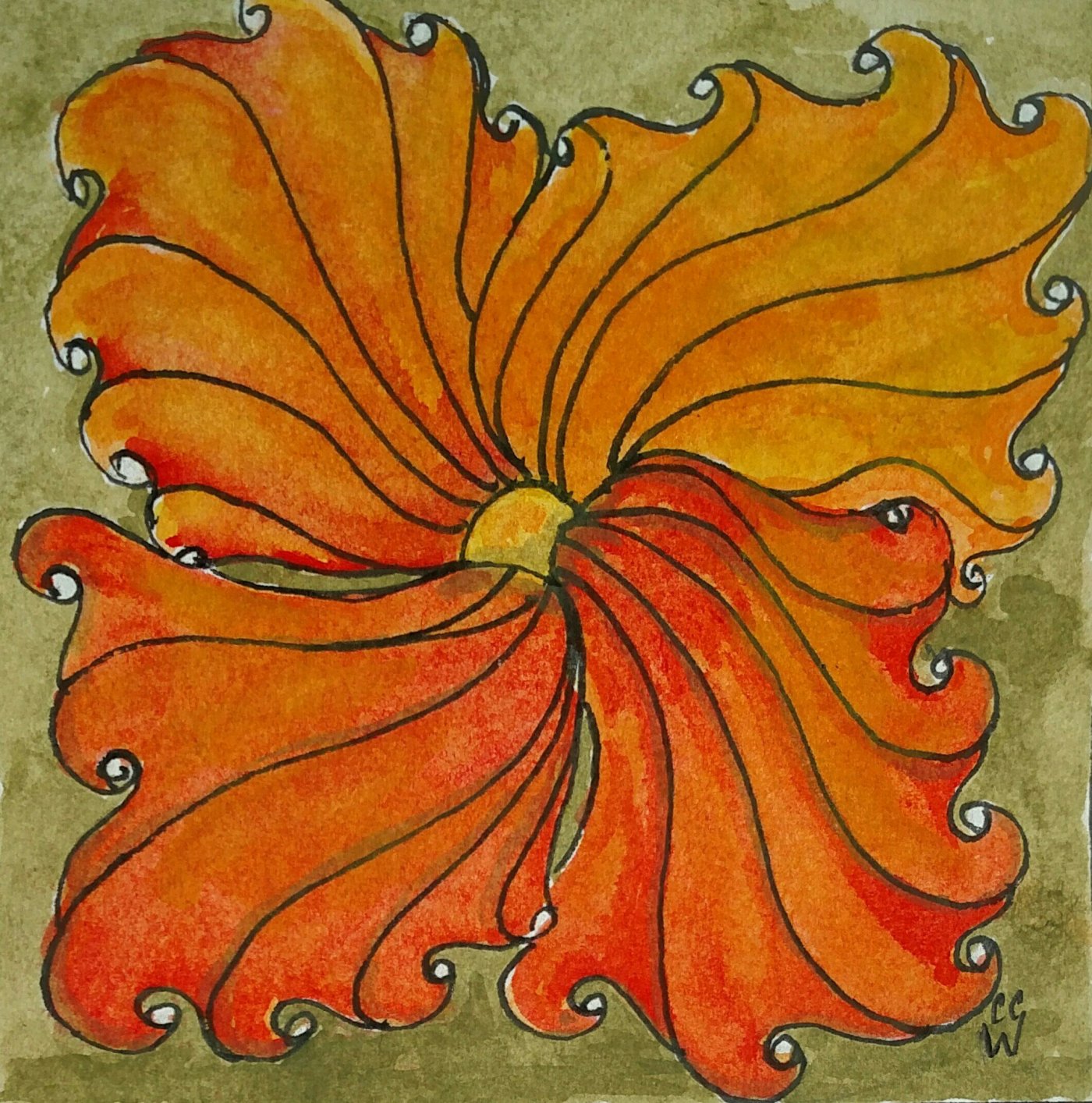 Tech issues, so this post will be composed in stages today.

One of those days when I can’t quite get my emotions under control – so all my devices are SLIDing and in the weirdest ways (im) possible. Let’s go from phone to ‘puter now … END_OF_DOCUMENT_TOKEN_TO_BE_REPLACED 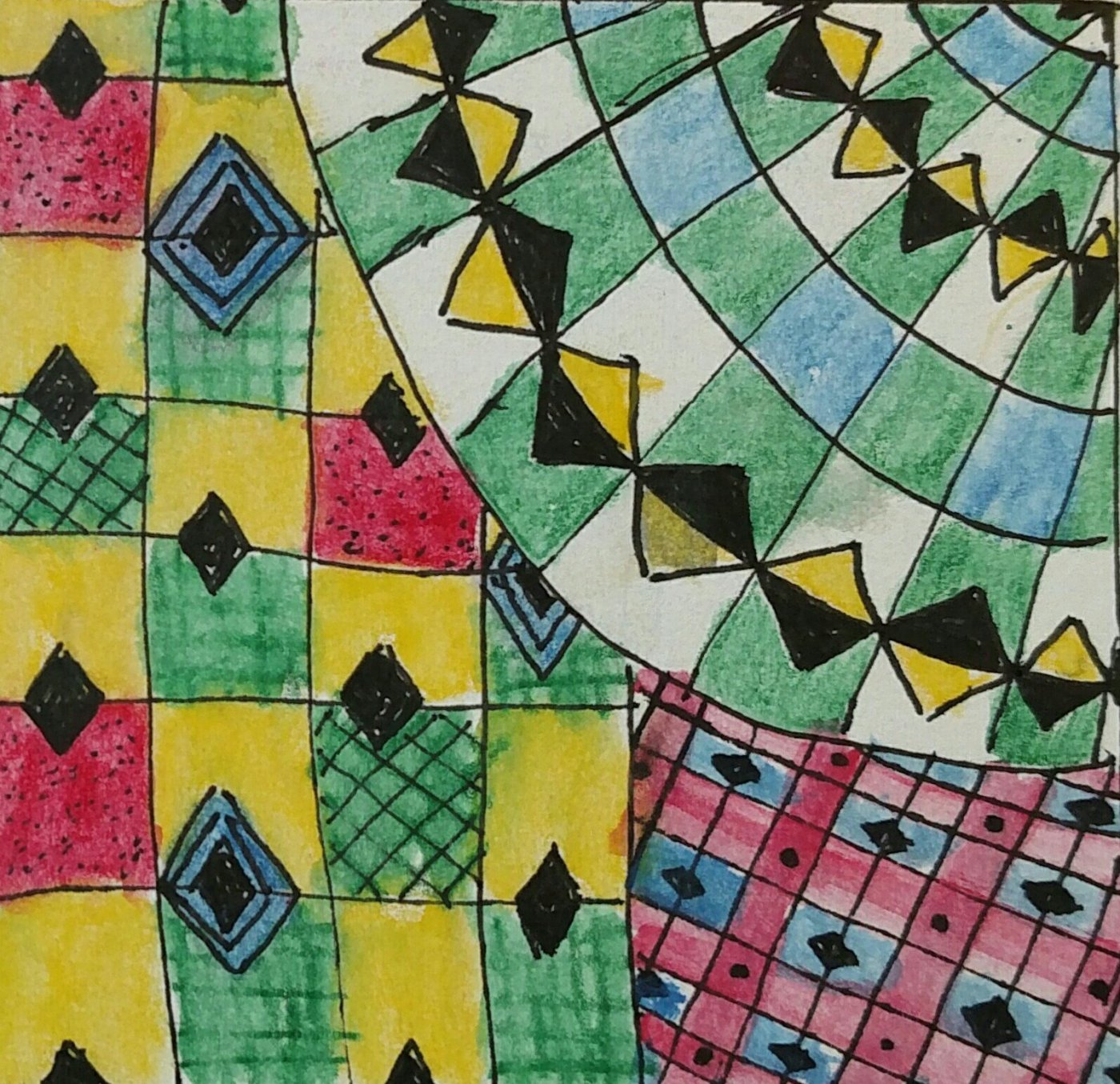 It’s Thursday which means a full day and I’m on the run. Let me share today’s writing challenges prompts.

And, yes, this is being composed on my phone because I’m on the run today, so it’s a stripped down version …. END_OF_DOCUMENT_TOKEN_TO_BE_REPLACED

Day 15 – Halfway done with November … and a poem 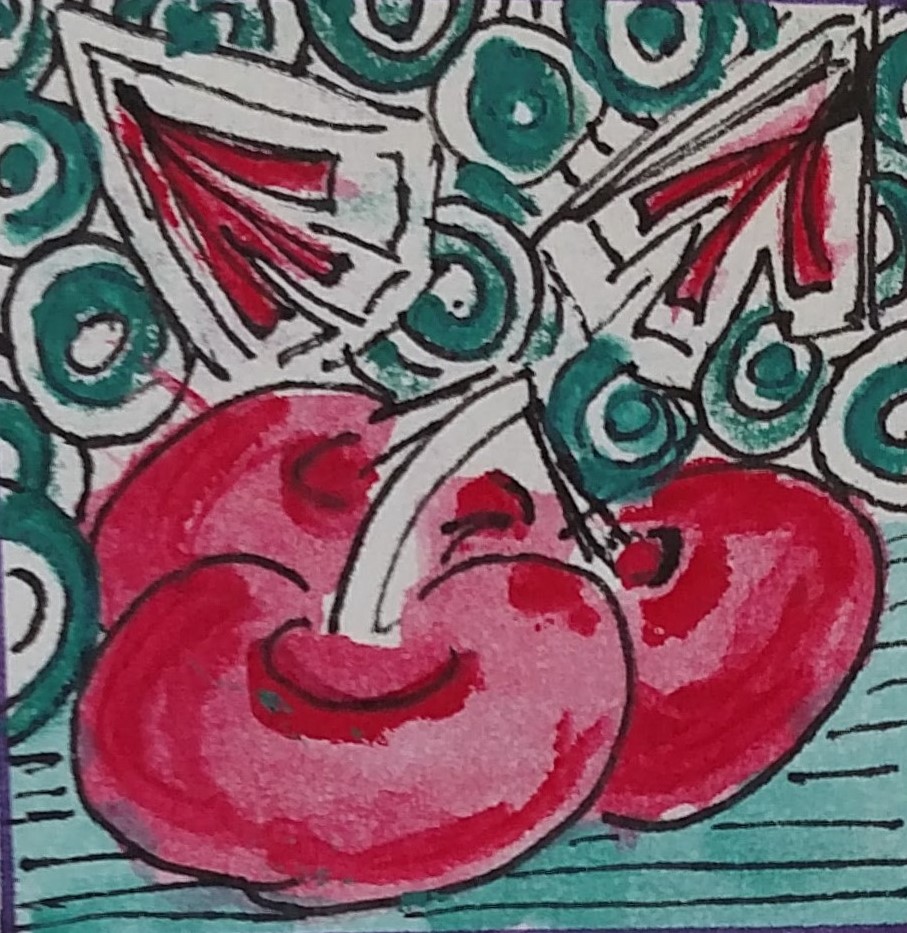 Halfway there! Of course, I refer to – not word count – but time. And if you find yourself not even halfway through the poems , not even at the 25K word count  at the end of today, that’s okay… We still have another 15 days; plenty of time still to write! END_OF_DOCUMENT_TOKEN_TO_BE_REPLACED 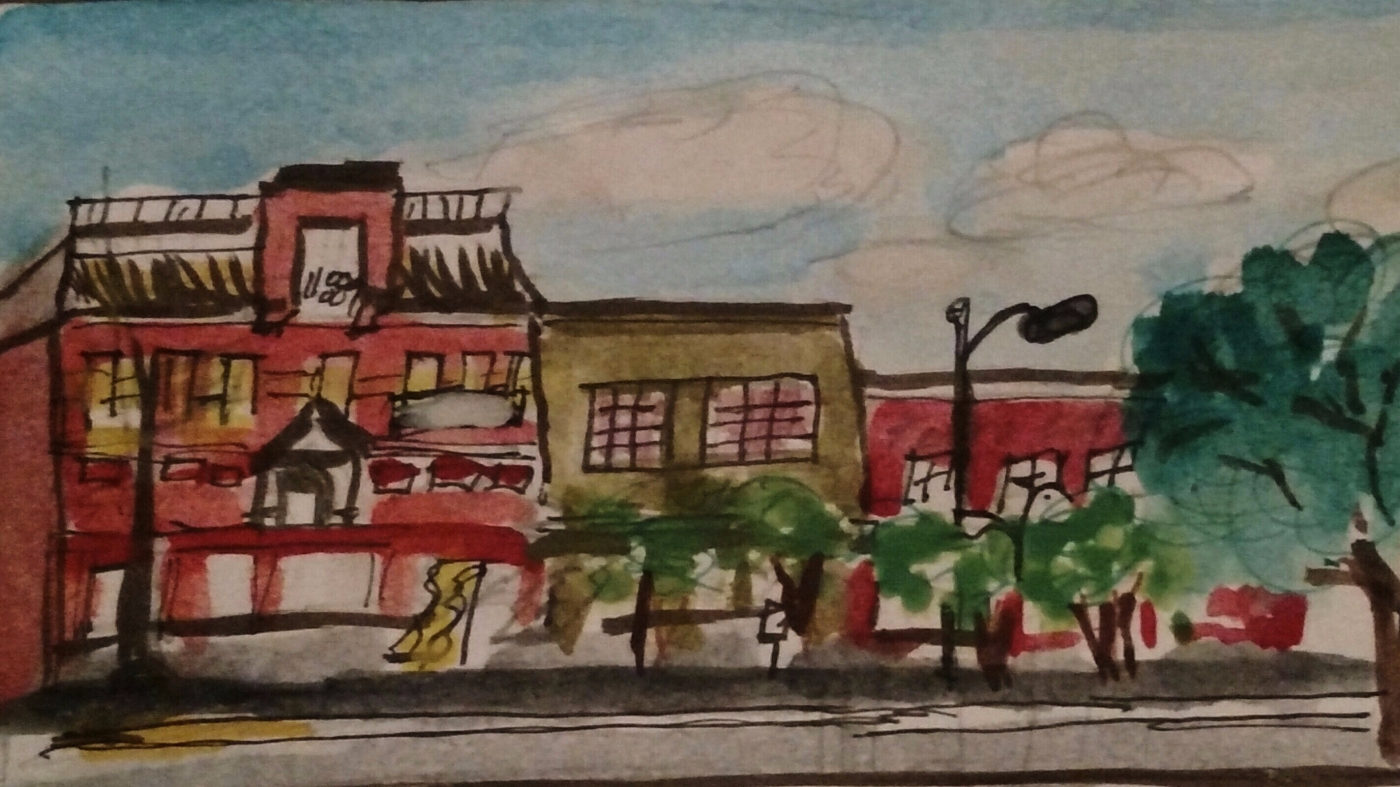 So yesterday was a silent – but productive day.

Silent – as  the devices I had access toinfested with bogarts & brownies and not letting me communicate with anyone (no keyboard, no mobile internet, heck – no clocks) and those that miht have worked … were missing or hidden. <rueful smile>  No posting; no writing.  END_OF_DOCUMENT_TOKEN_TO_BE_REPLACED 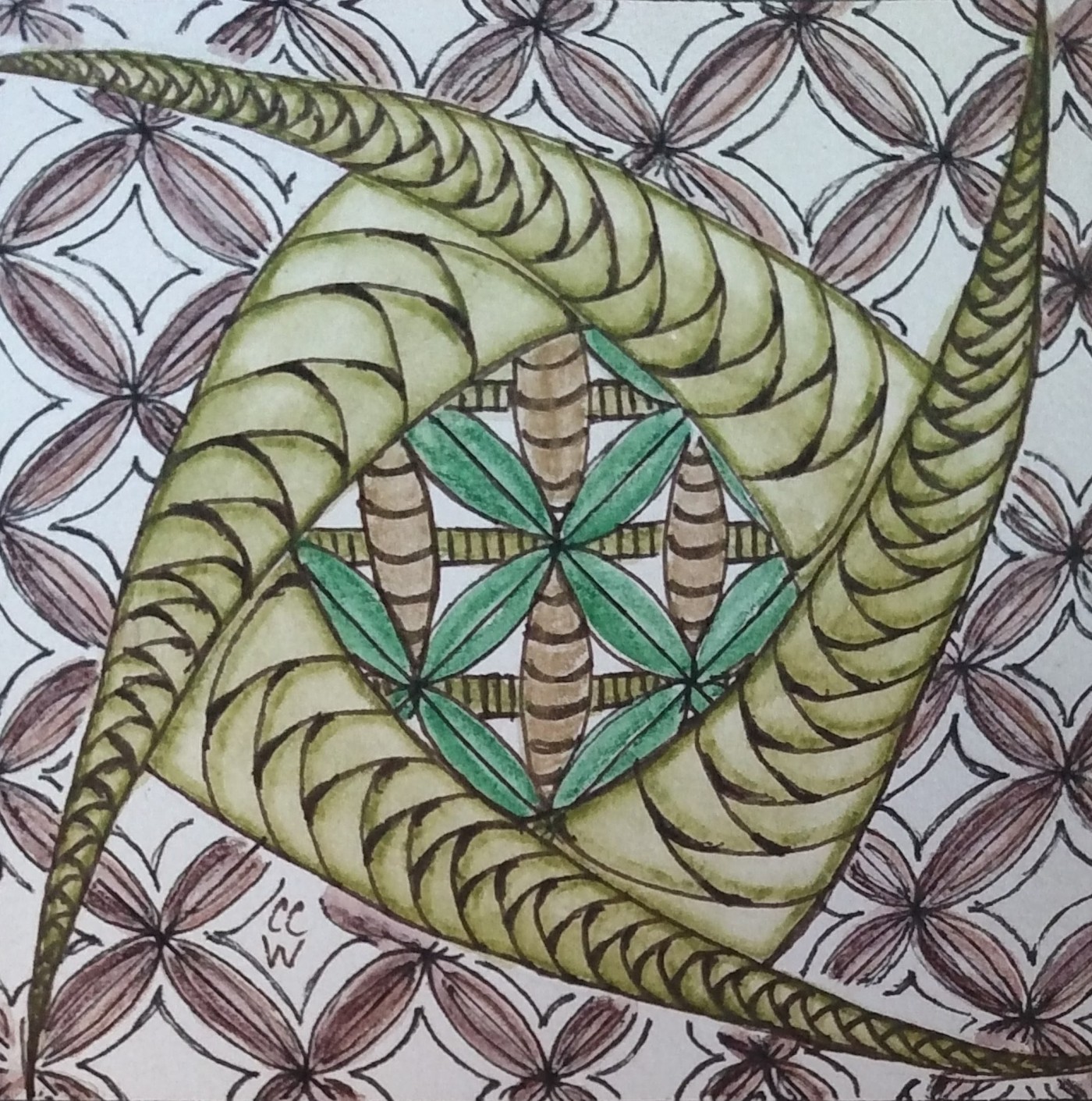 Today will be short – as I’m between apppointments right now.

NaNo’s suggestion for your novelling today is “write a world where electricity and light are living creatiures and some people can communicate with them“. 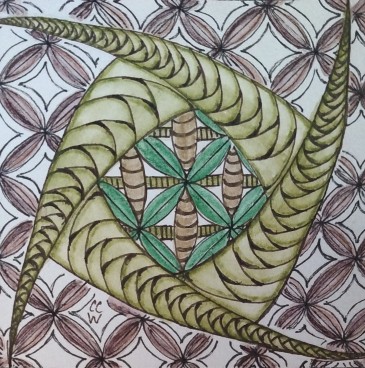 I am challenging myself to create one zentangle a day during November. I’ve been so caught up, as CC Willow, in marketing my art that I really have not had a chance to play &  create more.

Now scooting myself to group yoga … 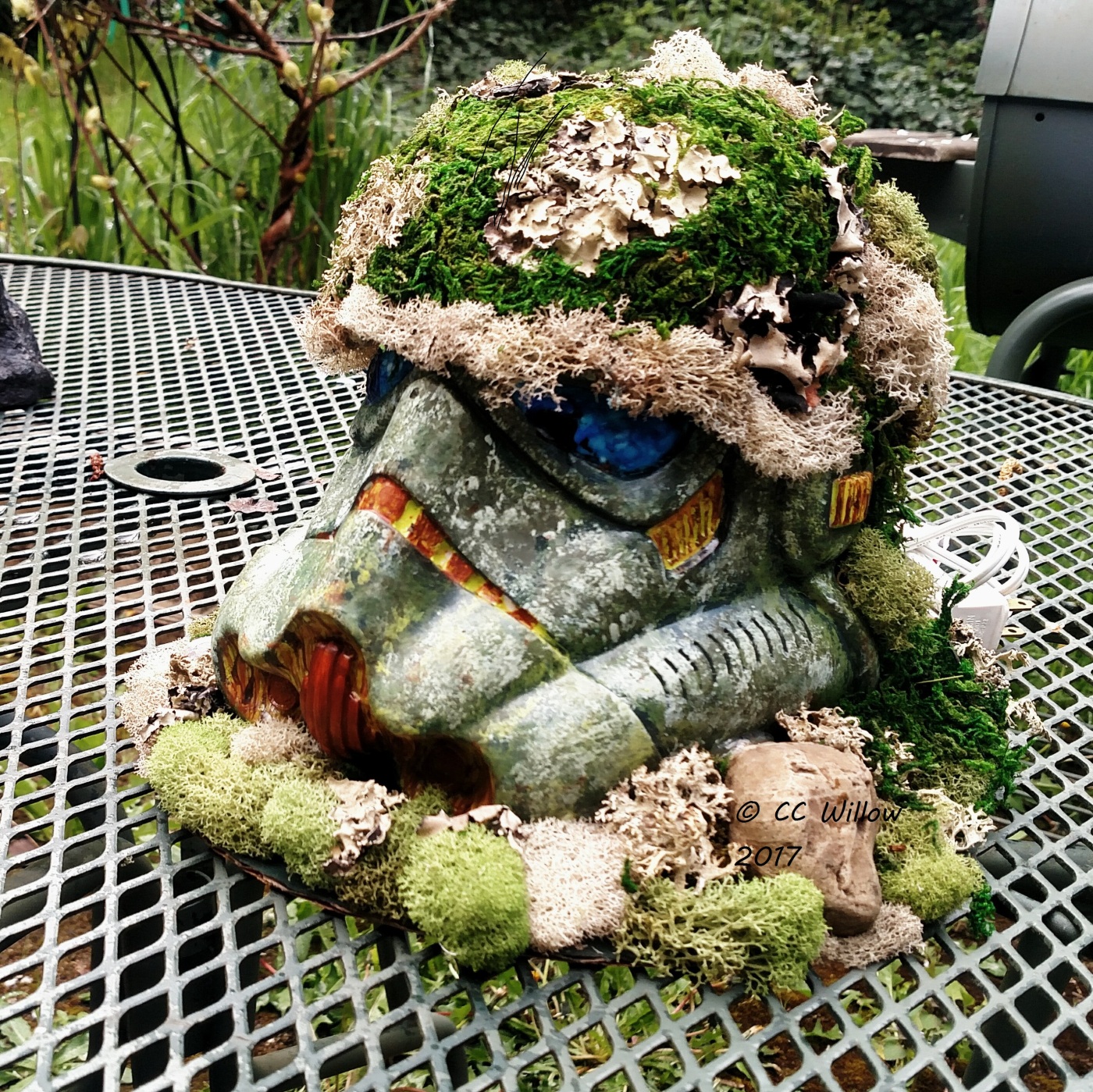 Day twenty-eight. Only three more days.  This is when you realize that Poem-A-Day challenges are hard. “Yes, show up ev’day. Write a poem …. didn’t I just write one ye’day. I’ve run out of words to say. My family has forgotten what I look like.  I ‘z go stuff to do.”

And yet, if you listen to your muse, you’ll find she’s happier than she has been in a long while. Now that you have stopped listening to your inner critic – started listening to her, you will find she has much more to say today.

For my personal Poem A Day Challenge , today’s PAD is … wary.

NaPoWriMo‘s participant is little learner.  The featured poet today is poet Kazim Ali, co-founder of Nightboat Books and author of three books of poetry.  NaPoWriMo’s prompt for today is a challenge you to write a poem using Skeltonic verse (or tumbling verse).  That  is a poem thatwas pioneered by John Skelton, a fifteenth-century English poet. Skeltonic verse features short stanzas with irregular meter, using only two strong stresses per line (otherwise know as “dipodic” or “two-footed” verse). The lines rhyme without a proscribed rhyme scheme. See the NaPoWriMo/GloPoWriMo site for a good example or check out  this link to Poetry Forms.

Poets&Writers is asking that today’s poem uses a clichéd phrase (“fit as a fiddle,” “think out of the box,” “running on empty,” etc.) and turns it around. Give it a new meaning .

The Poetry School‘s NaPoWriMo group today suggests that you write a haiku. But to be loose with it; don’t worry about the syllables and focus on the juxtaposition of two ideas or images  and the cutting word. See their prompt page for a more detailed prompt. 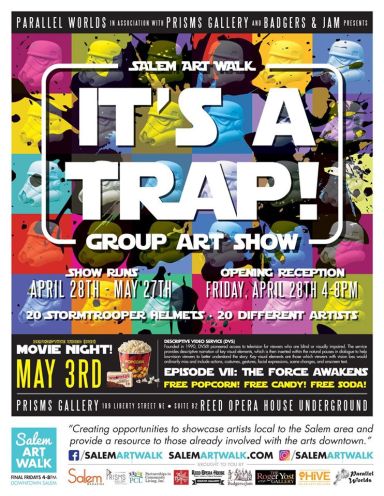 Let me shift gears here back into CC Willow – something I have been doing continously this week.  Salem’s Art Walk is tonight, AKA Final Friday Art Walk. My friends Anna C. & Russ (Star Wars fans, aren’t we all) have set this month’s theme as “It’s a Trap” & then promptly ordered 20-ish stormtrooper heads, handing them out to Salem artists.  I’ve been watching them coming back into Prisms Gallery; the Salem art community taken liberties! One of my favs is a steampunk theme done by friend Terra – I think Time Lord. Another is a lamp done by Christy Wood of Runway Crafts. (Before opening Runway, Christy often painted sets for Brush Creek Playhouse productions; amazing lady!) 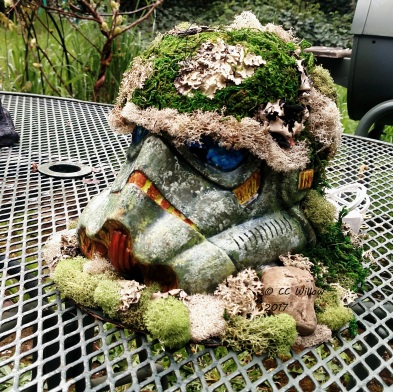 I, as noted on Tuesday, came late to the fun. And although I just brought my helmet home Monday, I had been planning the design since February and so, Thursday morning had a completed Helmet to turn in. My thought – What if a storm trooper’s helmet had been left a long time ago in the Pacific NW forests ? Maybe by space-faring Ewoks,. Or maybe by a longtime Empire/Rebel war. The movie did say “a long, long time ago”.  I added it to the growing collection, setting it on a podium next to Jonathon’s (Create-A-Memory) “Garden Wars”.  Come check it out; the Group project is always housed at Prism’s Gallery in The Reed’s Underground.

My Art Walk display,  at Create A Memory Studio this time, is almost complete. Jonathon helped me yesterday with it. I do have some new pendants added for sale, based on imagees from my Parrrot Tulip and my Iris paintings. And this morning I’m getting more cards printed and packaged.

Two of my pieces will additionally be on display at Russ & Anna D’s shop Parallel Worlds in The Reed Underground. We were chatting as I was taking down my April show at Prisms and he requested two for his red gallery wall.  It’s a great little indie store – I picked up some awesome throwing knives there in January! Do go in there! Both Anna D & He have some amazing work of their own on the wall, some collaborations, and work from other artists as well. Judging for the pieces they have gathered – that red wall is going to be amazing.

I understand that this Art Work has grown quite a bit & really has grown into quite an event. Saying something – since it is just 4 months old. It seems my buddies at Artists in Action have discovered it (Janet & I talking it up at this month’s meeting may have something to do with it) and now the walls above in the Salem Art’s Building are burgeoning.

Well – gotta run – or in my condition today, limp – along. Hope to see you at tonight’s shenanagins. I will be handing at Create A Memory – either with my easel or my sketch pad. 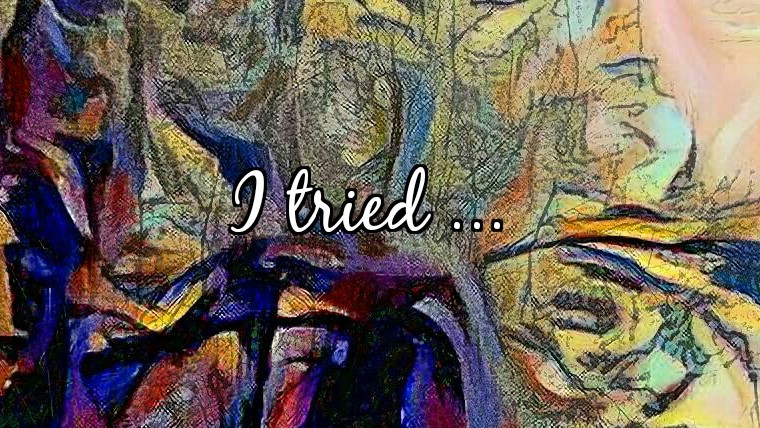 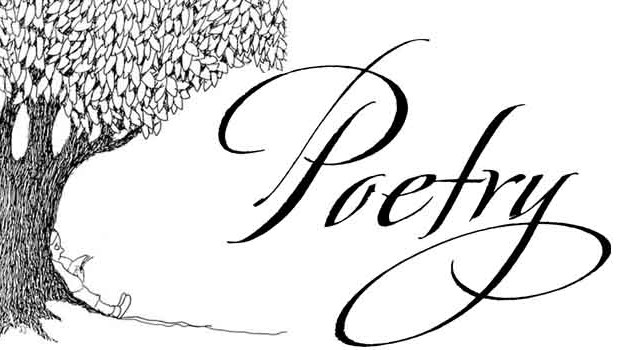 Day eighteen – saw me down for the count. It’s frustrating knowing how limited I am right now. Spent all day writing, some END_OF_DOCUMENT_TOKEN_TO_BE_REPLACED